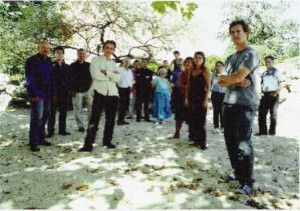 Chambered Music, Simon Steen-Andersen (b.1976) carries out a musical reflection on the notion of absence at the heart of presence, of differed presence, of being shunted aside, at a distance, which would not have displeased the philosopher of ‘differance’, Jacques Derrida (1930-2004). History of My Instrument is an homage to the Franco-American harpist Carlos Salzedo (1885-1961), combining video and re-appropriation of the artist’s performance: Simon Steen-Andersen claims to be a sculptor or a chiseller of sound. This dimension is also to be found in the music of Mauro Lanza (b.1975) and Jean-Luc Hervé (b.1960), influenced by the spectral heritage. Christian Winther Christensen (b.1977), a compatriot of Steen-Andersen’s, is also similar in his way of playing with the simulacrum of a presence that comes apart, shifts, and refers to new affects.